The first and the only router from Synology which I reviewed. I was shocked when I tested it with multiple devices. It is worth the money. Let’s explore it! 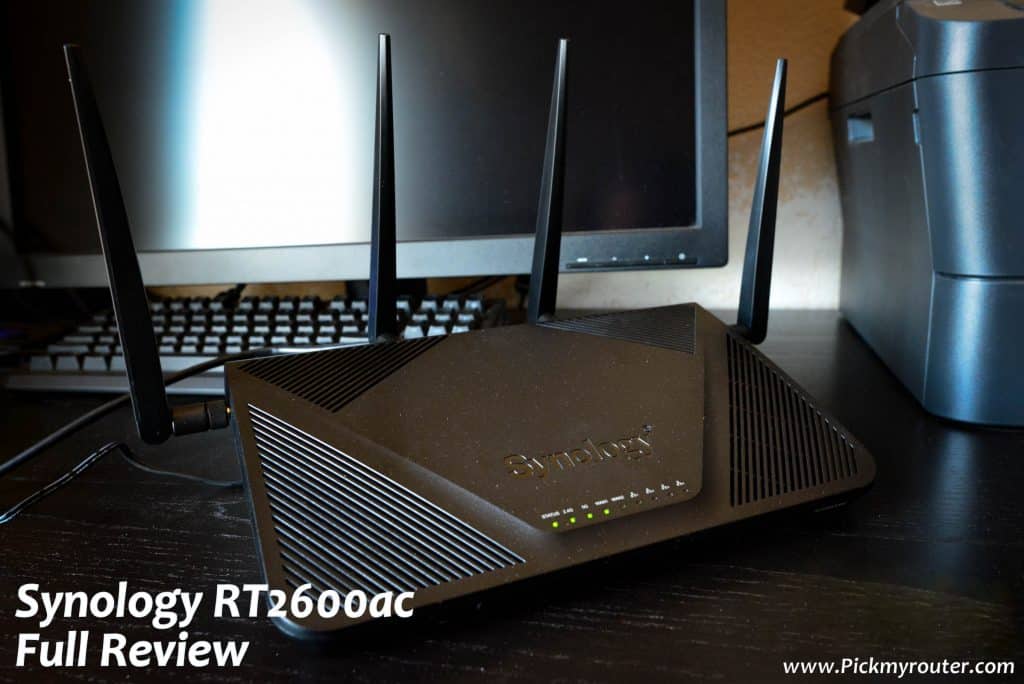 The Synology RT2600ac is a dual-band router. It is equipped with a 1.7Ghz dual-core processor. Plus, it also supports 802.11ac wave 2 with MU-MIMO & beamforming. It also allows you to expand its coverage with Mesh WiFi. Plus, you can use it as a wireless router, access point (bridge mode), or wireless client operation modes.

Verdict: Its advanced features are enough to create a customizable home network. You can expand the coverage by creating a WiFi Mesh network. It is designed for both offices and homes.

Box Contents: It comes with the four following items:

The rear panel consists of some buttons and ports. From left to right, the router has a power button with a power port. After the power port, it includes a reset button. Now, from 10 to 13, it has ports such as USB 2.0, WAN, WAN/LAN, LAN.

On the left side of the router, as you see in the following image, includes a WPS button with WiFi On/Off button.

On the right side of the router, you will see A WiFi Button, USB 3.0 port, and Eject button.

Like others, It also has four Gigabit Ethernet LAN ports. But, an additional three more Lan ports, which can be used as a dual WAN mode. One WAN internet port for connecting modem to it. Plus, two more WAN port if they used as a Dual WAN mode.

Unlike other routers, the only Synology router, which I’ve reviewed, has an SD card slot. It also has two USB ports: USB 2.0 and USB 3.0.

The dimensions of the router (if antennas are not attached) is 77x280x169 mm. The router is not as heavy as Asus RT-AC88U.

The Synology RT2600AC consumes from 100V to 240V AC input power and works on 50 to 60Hz power frequency. Operating temperature of the router is from 5-degree Celsius to 40-degree Celsius with a maximum altitude of up to 5,000 m.

The router comes with advanced security features, which can prevent us from unwanted websites, cyber threats, and viruses.

We can secure connections using SRM security feature; it blocks unsecured HTTP websites. However, SRM has both HTTP and HTTPS connections, by default, which you can change to avoid malicious attacks.

Another important protection is DoS; it allows the router to free up from computing resources, which gets overloaded with numerous networking requests. Resulting in, network suffers from connectivity issues.

This mode allows the router to work as a regular router. In this mode, routers transfer data between a local network and the internet, then deliver data using the optimal path. It also provides a wireless connection.

The bridge mode and an access point mode are the same things. You can use the RT2600AC router under access point too. However, using this mode, we will not be able to use functions such as port forwarding, traffic control, parental control, and local network.

This mode allows the router to work as a WiFi adapter. In other words, it works as a client and connects to another router’s WiFi signal. But, make sure the router is within the range; otherwise, it can cause unstable and poor connection quality.

The main rivals to RT2600 are Asus’s RT-AC86U, Netgear’s x4s, and Linksys wrt1900acs. However, the prices of these routers slightly different from each other. Recently I reviewed Asus’s RT-AC88U router, which I have been recommending for gamers. Now Synology RT2600AC is also on my best wireless router’s list.

Features and overall performance of RT2600AC router are top-of-the-line. I’ve used this for a long time without any issues. Price of the router is also great. So if you are looking for a home router or business one, you can consider this Synology RT2600AC. It has a lot more to offer from basic features to advanced.