The Netgear AX12 is the router that can take care of: not only today’s but also tomorrow’s growing home network with future proof Wi-Fi 6 standard. 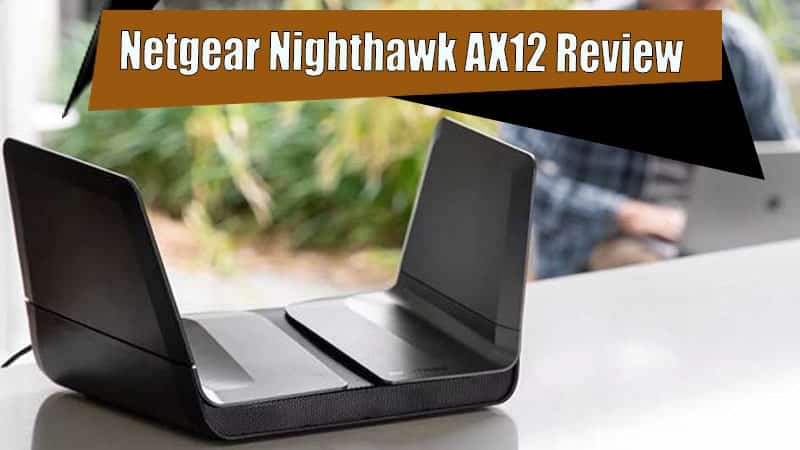 Before we get into its details, let’s take a look at some of the highlights of the Netgear Nighthawk AX12.

The Nighthawk AX12 is an 802.11ax WiFi standard supported router, where the number 12 refers to 12-stream. It is a nightmarishly faster router that ensures a blazing fast combined WiFi speeds up to 6Gbps. On the other hand, this router is equipped with the powerful 2.2Ghz 64bit quad-core processor, ensuring multiple devices at once with their highest potential WiFi speeds.

When it comes to streaming ultra-hd media content, this router will not let you down. As we already know, The ‘AX’ WiFi standard is known for the ‘Orthogonal frequency-Division Multiple Access‘ feature (as long as your router supports), thanks to the router Nighthawk AX12 for supporting the same. The OFDMA feature reduces the latency of the router and ensures a better WiFi experience.

The AX12 is not a small router; it is a huge one. However, being huge makes this router to look more pretty and fantastic. When you see this router first time, you might feel or think of a space ship that has two delta wings on the side. In other words, it has a unique, aerodynamic, and slick body.

This router conceals all the high-performance eight antennas under its wings, making the router beautiful with next-generation design. Plus, responsible for making it less bulky. If you want better WiFi coverage, the router allows the antennas’ up; however, these antennas are pre-optimized for the best WiFi performance. So, you don’t need to fold them down for the better result.

Let’s talk about its rear panel; it looks quite busy as it has so many physical ports and buttons. On the left side, you will find one LED On/Off button (it comes in handy sometimes), next to the button, there are four gigabit Ethernet ports (where first and second Ports allow Link aggregation feature, allowing a maximum of 2Gbps strong connection), one Gigabit WAN port. Two USB 3.0 ports with the power button aside. One feature that sets the router apart is Multi-Gig port; this Gigabit Ethernet Port is five times faster than a typical Gigabit Ethernet port.

When it comes to the Wifi range, this router breaks all the laws of coverage throughout. Even though it comes with Eight hidden antennas, the router still manages to give you an ultimate range or coverage throughout for very large homes. However, these antennas are pre-optimized for the best WiFi range and coverage. So, you don’t have to worry about whether they are up or not.

Packed with 12 stream WiFi makes this router 4x faster than the AC standard’s WiFi router. With the router, you get up to 6Gbps of combined wireless speeds (1200 + 4800Mbps @ 2.4Ghz + 5Ghz). Netgear has spent much time on making the router’s hardware powerful, thus providing you with an innovative technology called OFDMA with the router.

As the company claims, this high-end technology allows efficient data transmission up to Eight devices when they are connected simultaneously. Equipped with AX optimized powerful 2.2Ghz Quad-core processor, the router makes 4k UltraHD streaming and gaming smooth. On the other hand, AX12 comes with the Smart Connect feature, which automatically selects the fastest WiFi band for every device connection.

Netgear has done a great job when it comes to setup. Contrary to the previous Netgear’s router, RAX120 has a complete new look and easy management setup. If you have any Netgear router which you bought before, then you will see the difference.

Let’s take a look at some router’s setup steps: (4 steps are required)

Note: If you want to change the router’s setting again, repeat the third step. Plus, the router has two options for setup: Web Interface and Mobile app. However, I recommend the web interface.

There is not double; the RAX120 is a real beast. It offers high-end features and technologies. However, when the price is concerned, the router looks a bit expensive. As I said earlier, in this price range, you can easily create a whole-home WiFi sytem. If you don’t know what Mesh network is, then read this article. There are other three things, which I think, the router should have included: Cybersecurity protection, online gaming support, and mesh network capability.

Other than these features, the router is excellent in terms of design, performance, and setup. The following screenshot shows its 5Ghz WiFi performance. (Note: It has been measured in megabits per second).