Google Wifi vs Netgear Orbi : Which one is best wireless mess network for your smart home ?

Google Wifi vs Orbi: Mesh wifi systems use the latest technology which broadcasts your wifi network throughout your entire home in a more consistent way.

They are easier to configure compared to the more options such as routers and extenders. Mesh wifi systems are also far much better when it comes to coverage.

However, because this technology is relatively new, most people will have many queries concerning how it exactly works.

This page will explain what Mesh Wifi System is and how it works. We will also have an in-depth look at two of the most popular mesh wifi systems available in the market today, and these are non other than the Google Wifi system and Netgear Orbi system.

Stay tuned and learn everything you need to know about the cutting-edge devices.Without further ado, let’s first discuss what mesh wifi system is and how it works.

To start with, what’s a traditional Wifi system?Before we discuss what is a mesh wifi system, let’s first explain what is a conventional Wifi system. In a majority of homes, a wifi system includes a single router which is linked to a modem. This unit provides internet access and gives entry to the network across the entire home.

The downside of this system is that for users with large homes a single wireless router is usually insufficient to cover the entire home. Even when it does, the signal may be too weak resulting in dead spots. This is where a mesh wifi system comes in handy. So, now, what’s a Mesh Wifi System?

A mesh wifi system is an effective method of getting reliable and speedy wifi access throughout a home which is too big for a single router. The innovative system makes the process of configuring a wifi network, a hassle-free experience, compared to the conventional method of pairing the standard wifi routers to extenders.

A mesh wifi network has two significant benefits in that it is simple to configure and extend a network. Also, each of the individual gadgets functions automatically with each other to deliver a more consistent wireless network.

When you purchase a mesh wifi network, you’ll usually receive three or two devices. These gadgets can be distributed throughout your entire house and will provide you with a more consistent signal anywhere you are within the range. If you require covering more space, you can easily purchase another compatible gadget and link it to your network.

Another difference is that whenever you link an extender to a wifi device, you’ll often experience network speeds which are lower than on the router. But, mesh wifi systems will often experience a minimum slowdown. This means that you’ll experience excellent speed across the entire network.

Mesh wifi networks always come with algorithms. These algorithms enable the system to decide which node is simplest for a connected gadget to connect to. They also exchange information with each other allowing you to seamlessly switch between different access points as you walk around your home.

Unlike when you are using an access point on a conventional network, all your access points on the mesh wifi network will connect with each other wirelessly. What this means is that you won’t require adding any extra wires to your home. Interestingly, the only Ethernet wire you’ll require is the cable between your modem and the main access point of your mesh network. 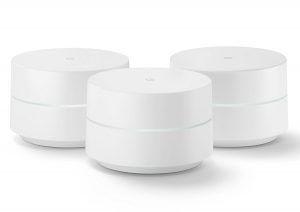 Google Wifi device is a new product in the mesh network market. The most attractive features for this Wifi network are price range and simplicity.

The system comes with three gadgets. Any of these gadgets can function as the main node which connects to the modem.

Interestingly, if you own a large home and you require more than three nodes provided, you can purchase the devices separately to increase your coverage area.

Some Other Important things that you should know.

Though it may not be the most powerful mesh wifi system to have, Google three-pack device is undoubtedly one of the easiest and cheapest ways to distribute strong wireless connections to a large house. It is the best unit for anyone who wants to set up a mesh network unit without breaking their bank. 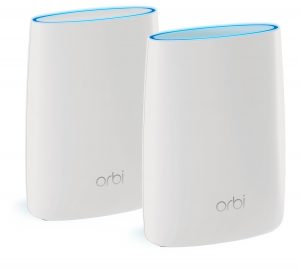 The Netgear Orbi is a tweaked version of the conventional Wi-Fi systems and routers. This sophisticated router can extend the coverage of wireless internet connection to the extent that can’t be achieved by a conventional router.

Being a Wi-Fi system containing a main wireless router and satellite, Netgear Orbi can consistently offer the great performance. One of its two routers functions as a powerful Wi-Fi extender.

What Wi-fi System Provides you

Although Netgear Orbi is a bit pricey as compared to the majority of wireless network systems for homes, it has lots of benefits that are worth the cost. Besides having an extensive wireless network coverage, the theoretical throughput rate of this system is amazing. Additionally, you don’t need rocket science to set the system up.