Eero vs Luma: Which Wireless Mesh Network is Best For Your Home?

Do you want to purchase a wireless mesh system? Then, this is your best place. We will contrast and compare the two most popular mesh networks known as Eero and Luma. The two of the products are simply awesome, and they have several advantages with few disadvantages.

The two products promise to provide you with a reliable and quick wireless network throughout your entire home. However, each of these products functions in slightly different ways. If you are looking to purchase a mesh network system, just have a look through our Luma vs. Eero page to assist you to decide between the two products!

A mesh Wifi system is an efficient way of achieving reliable and quick wifi access throughout a home which is too big for using just a single router. A mesh system makes the work of setting up your wifi network just a breeze, compared to the conventional method of pairing wifi extenders to routers.

Why Should You Set Up A Mesh Network?

A mesh Wifi system can solve a majority of your Wi-Fi issues. As opposed to stand-alone routers which lose signal as you move far away from them, mesh networks piggyback on each other to make a continuous wireless network throughout your entire home. This reduces the possibility of having dead zones.

When you purchase a mesh network, you’ll typically receive three or two gadgets.These gadgets may be distributed throughout your entire home and will provide you with a consistent network anywhere within the range. If you require covering more area, you may just purchase another compatible gadget and connect it to the network.The primary advantage is in the manner these gadgets communicate to each other.

What this means is that you’ll have to reconnect manually. But with a mesh wifi system, when the network detects that you’ll experience a stronger signal from your downstairs access point, it will automatically switch your network to the more powerful access point.

Expectedly, large homes with multiple rooms would get the most from mesh Wi-Fi system. But based on our tests with various mesh networks, we would recommend a mesh wifi system for even those people with modestly sized houses, for many reasons.

Here are the reasons, to start with, mesh Wi-Fi networks such as Eero among others include innovative smartphone applications which make the management of your network simpler to comprehend. For the second reason, a majority of mesh wifi systems are aesthetically attractive as opposed to conventional routers, which looks very unpleasing.

More importantly, mesh wifi networks accommodates a shift in how we use modern technology. We move around with mobiles gadgets such as tablets, smartphones, and laptops from this room to the other. With mesh wifi systems, our Wi-Fi coverage faces less chance of interruption.

We tested two popular Wi-Fi systems which are Eero and Luma Whole Home Wifi system. The two were solid, though we will tell you what was our favorite at the end of the article. For now, let’s first dive straight into the review of each of them.

Eero is one of the most-reliable, simplest home WiFi system. If you want to replace your router and range extenders, Eero Home WiFi System is your best bet.

One eero combined with two eero Beacons can cover a two to four bedroom house and provide quick and reliable WiFi speed.

With the most powerful hardware and intelligent WiFi technology, this innovative WiFi system is two times quicker than the traditional eero Home WiFi System.

Other Things to consider

Each Eero gadget is easy to use, easy on the eyes, very secure, very powerful and quick especially at close range. So, if you are looking to purchase a mesh network system which will provide you with reliable and consistent connection throughout your multiple rooms, check out this unit. 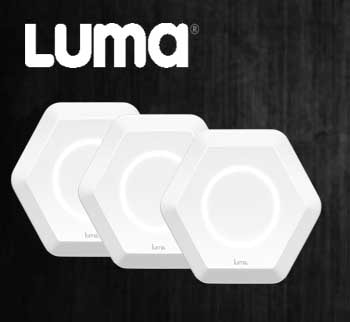 Luma’s Surround system connects every room of your house so you can forget about the annoying dead zones and buffering.

This unit offers innovative parental controls to make sure your kids can only access safe websites.

Some Other things to consider:

If you are looking for a mesh network that is simple to use and set up, here is your best bet. Luma is just as easy to configure as it is to utilize. Plug the device in, download the application, and it functions in minutes. Straight from there, the gadgets adapt to your house and seamlessly fine-tune their connectivity in real time to always provide speed and peak performance.

Eero vs Luma : Which One Is Better?